The Threepenny Opera by Bertolt Brecht 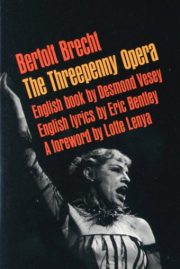 “One of the most important works in the history of musical theater.”—History.com

“Based on John Gay’s eighteenth-century Beggar’s Opera, The Threepenny Opera, first staged in 1928 at the Theater am Schiffbauerdamm in Berlin, is a vicious satire on the bourgeois capitalist society of the Weimar Republic, but set in a mock-Victorian Soho. With Kurt Weill’s unforgettable music – one of the earliest and most successful attempts to introduce jazz to the theatre – it became a popular hit throughout the western world.”—Vintage Press

“Brutal, scandalous, perverted, yet humorous, hummable, and with a happy ending—Bertolt Brecht’s revolutionary masterpiece The Threepenny Opera is a landmark of modern drama that has become embedded in the Western cultural imagination.“—Biblio, Inc.

If you enjoy the plays of Bertolt Brecht, be sure to see PlayMakers Repertory Company’s production of Life of Galileo, which runs from February 27 – March 17. Our book discussion may include references and comparisons to this performance.