To Drink from the Well: The Struggle for Racial Equality at the Nation’s Oldest Public University 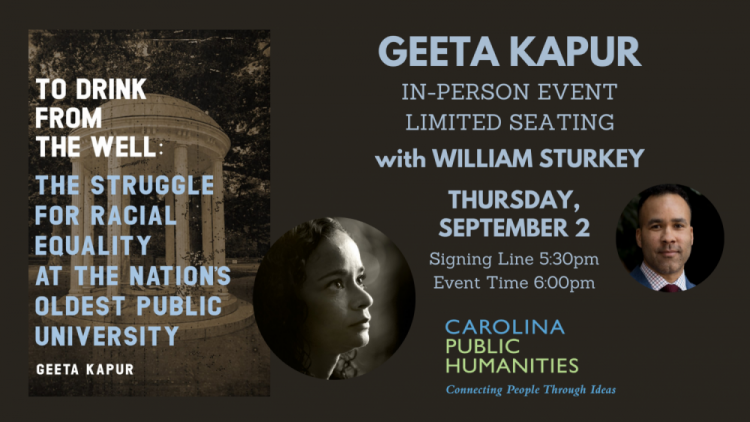 **All seats are SOLD OUT, but you can register to view the live stream over Zoom by clicking here.**

The University of North Carolina is the oldest public university in the US, with the cornerstone for the first dormitory, Old East, laid in 1793. At that ceremony, the enslaved people who would literally build that structure were not acknowledged; they were not even present. In fact, 158 years passed before Black students were admitted to this university in Chapel Hill, and it was another 66 years after that before students forcibly removed the long-criticized Confederate “Silent Sam” monument. Indeed, this university, revered in the state and the nation, has been entwined with white supremacy and institutional racism throughout its history—and the struggle continues today.

To Drink from the Well: The Struggle for Racial Equality at the Nation’s Oldest Public University explores the history of UNC by exposing the plain and uncomfortable truth behind the storied brick walkways, “historic” statuary, and picturesque covered well, the icon of the campus.

Law professor and civil rights activist Geeta N. Kapur chronicles the racism within the university and traces its insidious effects on students, faculty, and even the venerable Tarheel sports programs. Kapur tells this story not as a historian, but as a citizen speaking to her fellow citizens. She relies on the historical record to tell her story, and where that record is lacking, she elaborates on that record, augmenting and deconstructing the standard chronology. Kapur explores both the Chapel Hill campus and a parallel movement in nearby Durham, where a growing Black middle class helped to create North Carolina Central University, a historically Black public university.

Geeta N. Kapur is a seasoned civil rights and criminal defense lawyer who has devoted her career to defending poor and oppressed racial minorities. Kapur was the lead pro bono lawyer for North Carolina’s Moral Monday protests led by Reverend William Barber and received the North Carolina NAACP’s Humanitarian of the Year Award for her service. Kapur has taught an innovative pilot course on race and law at University of North Carolina at Chapel Hill and Campbell Law School. She is a native of Kenya and lives in Durham, North Carolina.

William Sturkey is an associate professor of History at the University of North Carolina at Chapel Hill, where he teaches courses on Modern United States History. He is also the author of the award-winning book, Hattiesburg: An American City in Black and White.

**All seats are SOLD OUT; however, due to the high demand, this program will also be live-streamed for home viewing. Click here to view the program virtually over Zoom.**

You may still order signed copies of the book to pick up in the store or have shipped to you after the event.