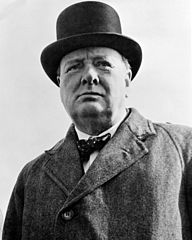 Winston Churchill (1874-1965) was one of the giant figures in twentieth-century global and British history. Although he is best known for his exceptional leadership during the Second World War, Churchill’s long career also included major roles in the British government during the First World War, strong commitments to defense of the British Empire, and important strategic contributions to European-American policies during the Cold War in the 1940s and 1950s. Two distinguished historians, Gerhard L. Weinberg and Klaus Larres, will help us understand Churchill’s ideas and global influence by focusing on these key eras in his public life and explaining how his actions affected modern history far beyond Britain. Recognizing that analysts and critics continue to argue about Churchill’s historical legacy, this seminar will expand the recent debates with well-informed perspectives on his decisions, world-view, and mistakes.

Why was Churchill an Exceptional Public Leader?
A panel discussion with our speakers