Keeping Your Seat to Take a Stand: Sarah Keys Evans & the Fight Against Jim Crow Transportation 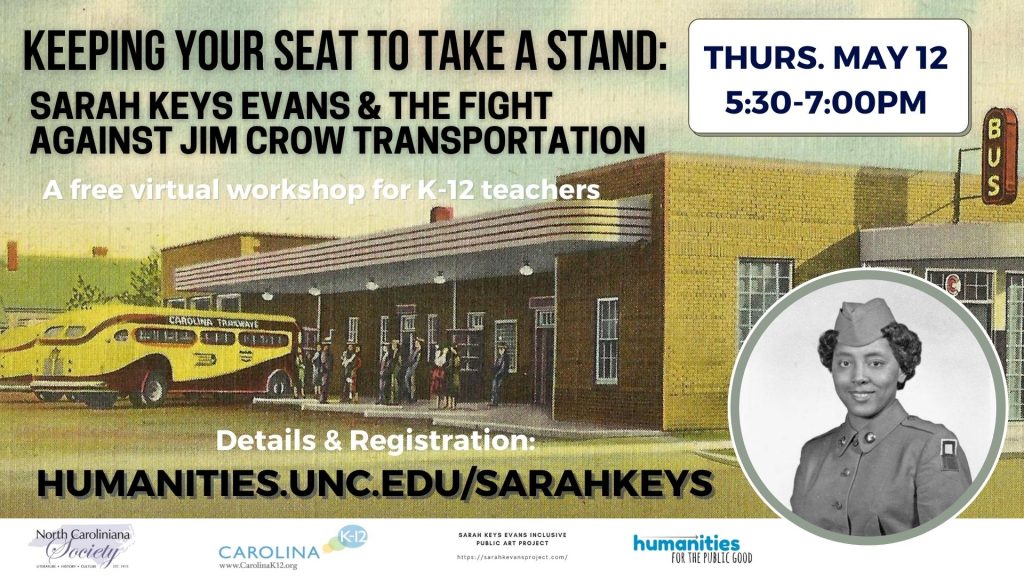 On Aug. 1, 1952, six years after the landmark Morgan v. Virginia case in 1946, five years after the 1947 Journey of Reconciliation set out to test its decision, and three years before the better known Montgomery Bus Boycott, 22-year-old Washington, NC native Sarah Keys, a Women’s Army Corps private, was wrongfully arrested in Roanoke Rapids, NC for refusing to relinquish her seat to a white man on an interstate charter bus. Yet, Sarah Keys refused to be intimidated, both that night and throughout the years to come. She saw her case through as it was brought before the Interstate Commerce Commission, with another trailblazer, Dovey Johnson Roundtree, as her lawyer. Finally, in 1955, in the landmark case Sarah Keys v. Carolina Coach Company, the ICC favored Mrs. Keys Evans, ruling that the Interstate Commerce Act forbids segregation.

In this installment of the William Friday Virtual Education Initiative, K-12 teachers (as well as the general public) are invited to join Carolina K-12, the North Caroliniana Society, and the Sarah Keys Evans Inclusive Public Art Project to explore the courageous actions of Mrs. Sarah Keys Evans. Dr. Blair Kelley (NCSU Humanities & Social Sciences) will present the story of Mrs. Keys Evans, situating it within the context of Jim Crow segregation and transportation activism overall. We will then be joined in discussion by Dr. Ervin Griffin, Sr., a founding member of the Sarah K. Evans Inclusive Public Art Project; middle school teacher Rodney D. Pierce, who helped ensure the erection of a NC Highway Historical Marker commemorating Keys v. Carolina Coach Company; and award-winning author Amy Nathan – who wrote Take a Seat–Make a Stand, a book for young readers about Sarah Keys Evans.

In our deep appreciation of educators, currently practicing K-12 teachers in North Carolina can choose one of the following children’s books to be mailed to you post-attendance; a lesson plan will also be provided:

Suggested pre-reading: Years Before Rosa Parks, Sarah Keys Refused to Give Up Her Seat on a Bus, TIME Magazine

Teachers can also receive .2 CEUs post-attendance. (For a larger increment, teachers can combine this program with other Virtual CEU Modules offered by Carolina K-12.)

Funding for this program & its resources is provided by the North Caroliniana Society and Humanities for the Public Good, an initiative at UNC-CH’s College of Arts & Sciences.

On April 9, 1947, the Congress of Racial Equality (CORE) sent 16 brave civil rights activists, 8 Black and 8 white, to ride together on buses through the American South. Why was this a dangerous and revolutionary action? With the South still in the clenches of Jim Crow laws and etiquette, CORE’s mission was to test a recent Supreme Court decision, Morgan v. Virginia (1946), which had actually struck down segregation on interstate bus travel. This so-called “Journey of Reconciliation” in 1947, a critical precursor to the more known Freedom Rides of the 1960s, lasted two weeks. Throughout that time, riders tried 26 different seating arrangements on various buses across Virginia, North Carolina, Tennessee, and Kentucky. Riders were arrested during six of those attempts.

On April 13, 1947, on the last leg of the trip departing from Chapel Hill, NC to Greensboro, NC, four riders (including CORE treasurer Bayard Rustin) were arrested after being attacked by an angry mob. They were tried, convicted, and sentenced to serve 30 days on a chain gang. With their appeal to the Supreme Court denied, three of the Riders surrendered at the Hillsborough Courthouse in March of 1949 to serve their sentence on segregated chain gangs in Roxboro, NC.

Join the 18 Judicial District of NC, Carolina Public Humanities, and other community partners on Fri. May 20th (2 pm) at the historic Hillsborough Courthouse, 75 years after the “First Freedom Ride,” as we commemorate the 75 year anniversary of this legal travesty.This FREE, dynamic event will include a keynote address by author & professor Gene Nichol (UNC-CH School of Law), “The Journey: Courage, Hate and the Unending Struggle for the Promise of America”; Attorney James Williams will discuss the role of Black lawyers in challenging Jim Crow in transportation; Poet, artist and performer CJ Suitt will provide an artistic interpretation of of the courthouse proceedings; and Vocalist & educator Mary D. Williams will perform Freedom Songs from the Long Civil Rights Movement.

Details and FREE registration available at https://humanities.unc.edu/reconciliation75/ (Lesson plans and additional resources are also available at this site.)