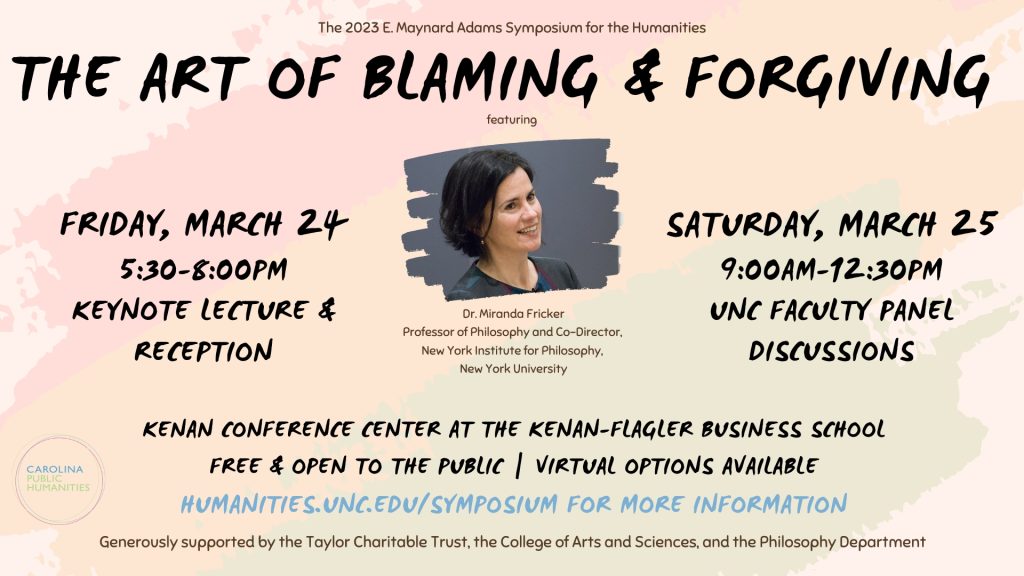 The Art of Blaming and Forgiving

The 2023 Adams Symposium for the Humanities

The sixth annual symposium in honor of distinguished UNC philosopher Maynard Adams (1919–2003) will focus on the emotionally charged dimensions of difficult social relationships: What is the point of blaming someone after they have wronged you? Does blame help the wrongdoer see the moral significance of what they have done?

The symposium will begin Friday, March 24 at 5:30pm with keynote speaker Miranda Fricker, professor of philosophy and co-director of the New York Institute for Philosophy at New York University. Her lecture, “The Art of Blaming and Forgiving,” will explore these questions to suggest how the experience of blaming and then forgiving can become an interpersonal art that creates shared moments of moral understanding. A reception will follow Dr. Fricker’s talk.

The symposium continues on Saturday, March 25 with two panels of faculty colleagues and public humanists will respond to Professor Fricker’s themes and discuss why it is difficult to forgive wrongdoers. Panelists will be announced shortly.

The Adams Symposium is free and open to the public. Both days will take place at the Kenan Conference Center (click for map) at the Kenan-Flager Business School on UNC’s Campus. No registration is required is required for in-person attendance.

Use the links below to register for the virtual keynote or virtual panel discussions.

Carolina Public Humanities thanks the Taylor Charitable Trust, the College of Arts and Sciences, and the Philosophy Department for generously supporting this year’s Maynard Adams Symposium.

In Spring 2017, Carolina Public Humanities offered a new initiative to bring scholars and the general public into dialogue on issues important to living in a “Society fit for Human Beings.” Our inaugural symposium, “The Power of Emotions in Personal and Public Life,” featured distinguished philosopher, Martha Nussbaum. The 2018 Adams Symposium, “Disagreements, Intolerance, & Incivility in Public Life,” featured NYU School of Law Professor Jeremy Waldron. The 2019 Adams Symposium, “Why is Climate Change so Difficult to Address or Stop?,” featured Philip Kitcher, John Dewey Professor of Philosophy at Columbia University. Unfortunately, the 2020 Symposium, “Philosophy, Prisons, and the Search for Social Justice” featuring Tommie Shelby, Caldwell Titcomb Professor of African and African American Studies and of Philosophy at Harvard University, was canceled due to COVID-19. We held our first virtual Adams Symposium in 2021, “What Should the Work Ethic Mean in a Twenty-First Century Capitalist Society?” featuring Dr. Elizabeth Anderson, the John Dewey Distinguished University Professor, John Rawls Collegiate Professor, and Arthur F. Thurnau Professor in the Philosophy Department at the University of Michigan. The 2022 Adams Symposium, “Social Class Differences and the Search for Political Solidarity Among Black Americans“, featured Dr. Tommy Shelby, Caldwell Titcomb Professor of African & African American Studies and of Philosophy at Harvard University.

The Adams Symposium is named for E. Maynard Adams, who was Kenan Professor of Philosophy at UNC Chapel Hill. Professor Adams (1919-2003) played a key role in the creation of the UNC Humanities Program and was an eloquent spokesman for the role of the humanities and human values in contemporary education and culture. We invite you to explore the world of Maynard Adams by visiting this page dedicated to his life and works.

This symposium replaced the Adams Lecture (1998-2013), which featured outstanding faculty from the UNC College of Arts and Sciences. The full list of past honorees is below.

1999 – Gerhard Weinberg, “Peace, War, and the United States in the Twentieth Century”

2000 – William E. Leuchtenberg, “The American Presidency in the Twentieth Century”

2002 – Lilian Furst, “The Novel as Social History: Windows on the Past”

2003 – Weldon Thornton, “Are Our Universities Failing Their Intellectual Mission?”

2008 – Richard Kohn, “On Presidential War Leadership, Then and Now”

2010 – Joseph M. Flora, “Professing the Humanities in a Post-Modern World“

2012 – Joy Kasson, “Dramas of History and Vision: Three Contemporary Artists and the Necessity of the Arts”

2013 – H. Holden Thorp, “From Salesman to Hamletmachine: The Need for the Humanities”