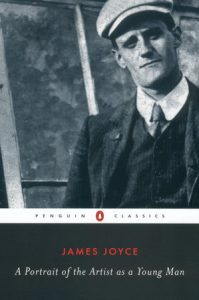 “James Joyce’s supremely innovative fictional autobiography is also, in the apt phrase of the biographer Richard Ellmann, nothing less than ‘the gestation of a soul.’ Joyce immerses the reader in his emerging consciousness, employing language that ranges from baby talk to hellfire sermon to a triumphant artist’s manifesto. The result is a novel of immense boldness, eloquence, and energy, a work that inaugurated a literary revolution and has become a model for the portrayal of the self in our time.”—Penguin Random House

“Joyce’s novel remains vital, in contrast to almost all other novels published in 1916, because he forcefully strived toward an idiosyncratic form of expression, a language intrinsic to the story he wanted to tell.”—The New York Times Magazine

“He took on the almost infinite English language. He wrote in a language invented by himself….Joyce brought a new music to English.”—Jorge Luis Borges