*Canceled* Confessions of an English Opium-Eater by Thomas De Quincey 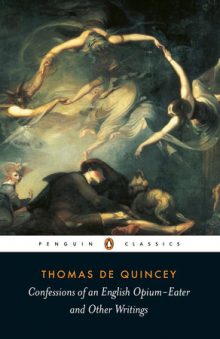 “In this remarkable autobiography, the first literary addiction memoir, Thomas De Quincey hauntingly describes the surreal visions and hallucinatory nocturnal wanderings he took through London—and the nightmares, despair, and paranoia to which he became prey—under the influence of the then-legal painkiller laudanum. Forging a link between artistic self-expression and addiction, Confessions of an English Opium-Eater and Other Writings seamlessly weaves the effects of drugs and the nature of dreams, memory, and imagination. First published in 1821, it paved the way for later generations of literary drug users, from Baudelaire to Burroughs, and anticipated psychoanalysis with its insights into the subconscious.”—Penguin Random House

“Confessions of an English Opium-Eater remains its author’s most famous and frequently-read work and one of the period’s central statements about both the power and terror of imagination. A notorious success since its 1821 publication, the work has been an important influence on philosophers, theorists, and psychologists, as well as literary writers, of the nineteenth and twentieth centuries.”—Broadview Press