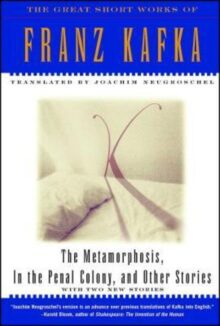 More than any other modern writer in world literature, Kafka captures the loneliness and misery that fill the lives of 20th-century humanity

Franz Kafka’s imagination so far outstripped the forms and conventions of the literary tradition he inherited that he was forced to turn that tradition inside out in order to tell his splendid, mysterious tales. Scrupulously naturalistic on the surface, uncanny in their depths, these stories represent the achieved art of a modern master who had the gift of making our problematic spiritual life palpable and real. —Everyman’s Library

In 1945, W. H. Auden remarked that Kafka stands in the same relation to his century as Shakespeare does to his―Kafka is the representative of the twentieth century, the poet who gives it its voice. —W. W. Norton Publishing

Franz Kafka is a modern master—a master, more specifically, in the modernist tradition, housed in the same pantheon as Joyce, Picasso, Stravinsky, Mallarmé, and other artists who have radically altered contemporary understanding of the world….The works of Kafka—apart perhaps only from the Bible and the works of Shakespeare—may be the most relentlessly interpreted, if not overinterpreted, in the modern world. —The Atlantic

The strange world Kafka depicts in his stories has given rise to the adjective “Kafkaesque,” which Merriam Webster defines as “having a nighmarishly complex, bizarre, or illogical quality.” —Richer Resources Publications

Cost: $35, includes a copy of the book shipped to your home