World War II in the Pacific 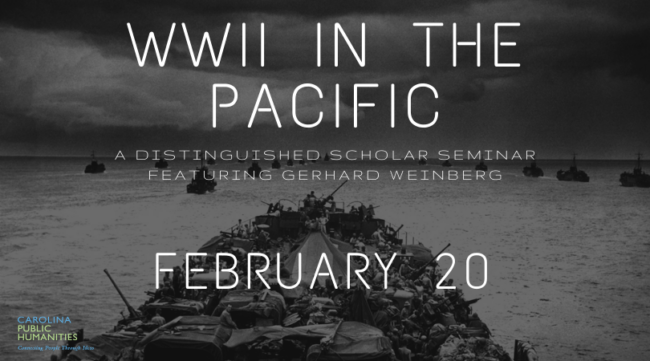 The struggle to defeat the Nazis in Europe often dominates historical discussions of the Second World War, but the overlapping war in Asia and the Pacific produced equally horrific human and economic losses. More than 20,000,000 people died in China, and many millions more perished across Southeast Asia, Korea, and Japan. The economic disruptions also produced long-term hardships that affected postwar political transitions. This seminar will examine why Japan launched its Asian military campaigns, how the United States and Great Britain developed strategic responses to Japanese imperialism, and how other countries such as China and the Soviet Union also participated in the Pacific War. Join distinguished scholar Gerhard Weinberg for another well-informed seminar on the causes, strategies, and legacies of the Second World War—with particular attention to the vast conflicts in east Asia between 1941 and 1945.

Gerhard L. Weinberg is William Rand Kenan Jr. Professor of History Emeritus. He is an internationally known expert on all aspects of World War II and author of numerous books, including the comprehensive, award-winning masterwork A World at Arms: A Global History of World War II.

British Strategy in the War with Japan and Changes in Strategy until 1945, Including a Brief Review of Chinese and Soviet Strategy

This webinar is a virtual event. Tuition is $50, which includes “admission” to the webinar in real time (with live Q&A) as well as access to the recorded talks to watch at your leisure for up to 2 weeks after posting. Registrants will receive instructions for accessing the event online the afternoon of February 19.

Online registration closes at midnight the night before the event. For same-day registration, please call our office at 919.962.1544.

Tuition is complimentary for any currently teaching, full time K-12 teachers. If you are eligible, click here to register. Complimentary teacher registration closes at 4:30 pm the Friday before the event.